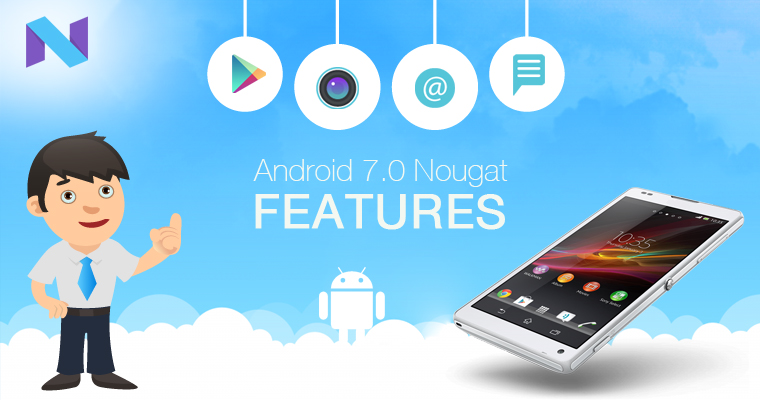 Features loaded Android Nougat has been recently launched and though it is not visually much appealing as its predecessors, it is certainly compensating its looks with its functions. Many functions have been added in both the front and the back end.

What is Android Nougat?

Nougat is all about expanding the list of its existing features; improvement upon the old features and adding futuristic features. After reading this sentence you could understand the general deviation from Lollipop and Marshmallow versions of android. Earlier android versions have not been dynamic with respect of features. They were more or less similar.

With respect of appearance, both Lollipop and Marshmallow were similar but it added some advanced features like the fingerprint API, Doze Mode and granular permissions. Redesigned settings menu of Nougat is a new visual feature. But stronger functional variations have been incorporated in Nougat rather than visual impressions.

Split-screen mode was a feature previously added with custom ROMs. However, after its incorporation with Android Nougat, you can avail its multiple features on your mobile devise itself.

The feature of quick switch app helps you to shuffle between two currently used apps. This feature works in system-wide modes. You can switch over from a full screen app and can also use it on a secondary window through split-screen mode.

Android 7.0 has added 2 most prominent features in the form of left side hamburger menu and the addition of high-order information under every section of title for the Settings.

Forget about the limbo state between the decryption and booting up modes. Random rebooting without your knowledge could translate into bigger problem in the form of missing notifications. Nougat will let you boot still the lock screen before letting you to insert either the PIN or the pattern unlocking system.

The world of mobile app development is rapidly moving forward. Keeping with pace, newer features are added with mobile apps and it is expected that Android 7.0 version will facilitate the entire process.